Throughout my Senior year, I continued doing Godless shows, while working on my own band – Terratism – with friends of mine. This didn’t really impact my ability to perform with them, but it did give me something of an ego complex. It’s a tough thing to admit, but I was riding a pretty sweet high of adoration in my Senior year. I had younger friends looking up to me, several different social circles spread across the vast landscape of Phoenix, I had my own little “fan base” that would come to Godless shows just to see me perform, and I’d regularly upstage Brad (et al) a bit more than accidentally. One time at The Nile, I asked Brad if I could wish a friend “happy birthday”, and proceeded to do a Marilyn Monroe-esque “happy birthday Mr. President” thing while rubbing my crotch. I still cringe at the memory.

While my own band wasn’t doing any actual live shows, I was a regular at various other bands’ shows, and that scene was very tight-knit and if you were part of any act that performed within the scene, you were pretty well known. I, naturally, used that to my advantage many times with anything on two legs with tits and heavy eyeliner.

As my high school career was coming to a close, so too was my time with Godless. Guy & Terri were getting married, Brad was getting divorced, both Dan and Guy wanted to focus on their careers and families, Dan was moving to Seattle, and Mick had other projects he wanted to focus on – as did I. In April 1997, I performed with Godless one last time for the “New Times Music Awards Showcase”. We were tossed into this air-conditionless old theatre, surrounded on all sides by other theatres with other bands, and all I can really remember is trying to jump off the monitors and smash things into the stage. Godless, who was nominated for 5 awards, ended up winning 2 : “Valley Music Scene’s Best Kept Secret” (which is always a bittersweet category), and “I just want to see body piercings” (which probably wasn’t a real award, but it was mentioned at the time). There was a blurb from one of their music editors who was recapping the day of madness :

I popped into Valley Art Theatre, where Godless orchestrated a show that felt like a scene from a Clive Barker story. Seething assaults of industrial rock blasting in a run-down, pitch-black, vintage movie theater that reeks of Pine Sol and popcorn. The only light was a strobe that cast grossly extended shadows of the band members on a drop curtain behind them. Quite effective in sum, actually, and, in truth, Godless was the only band that made Valley Art work for it instead of against. But I wasn’t in a bad-acid mood, so I split for the Valley Art outdoors stage…

That night, I saw one of my favorite local bands – Nihil – who asked if I’d “do my gimp thing” with them for their CD Release Party in a few months. They’d just been signed to Mercury Records, along with the kings of Phoenix industrial music – N17, and I figured it’d be a fun show. And it was, though it felt odd donning the costume and doing the motions for a 2-piece mellow-industrial act. About a year later, I was hired for a “super group” called Rusted Jesus – comprised of N17 and another huge Phoenix industrial band, BLESSEDBETHYNAME – to do my thing again. That night, I wrapped an entire cigarette-pack worth of cigarettes in tape, lit it up, took a few drags, and put it out on my chest. That was how it went out as “the gimp” – not with a bang, but with a sizzle.

After Godless, I never saw or heard from Mick. I don’t know anyone else who has, for that matter.

I saw Brad a few years later, when he was working with the drummer of my band (after our band’s breakup) on a new industrial music project. I don’t know if anything came of it, since I moved a few months later. He’s since remarried and, I’ve been told, has 2 kids.

Dan moved on to Seattle, and now lives here in LA. I haven’t seen him in probably 17 years at this point, but we’re friends on Facebook. He’s got a fiance and is the CEO of a merchant processing company (that’s a company that exists between people selling things and the Big Banks who collect the money).

Guy and Terri are still good friends of mine, though I don’t see them that often, but we still talk on Facebook. They’ve got two daughters, and they’re still together. In fact, they invited me out to Phoenix to be the officiant (me being a Reverend and all) when they renewed their wedding vows a few years ago, which we celebrated by going to a goth club and doing absinthe shots (with Chrissy, of all people). They keep tabs on what I’m doing, which is still so goddamned flattering I almost cry. They’re truly wonderful people, and I’m pretty sure they’re unaware how much hero-worship I’ve had for them all these years. That said, I’ve never figured out why either of them talked to me in the first place – much less all these years later.

As for me – well, I’ve still got a bunch of little circular scars on my stomach and chest from the shitty candles, cigarette burns, and god knows what else I did up there, along with a small scar below my lower lip from the time I pierced it with a safety pin during one of their shows. Other than that, I’m mostly still in tact. The important thing is that I said “yes”, and for that I was given a wonderful gift of being a part of a fantastic project that I’ll never forget. 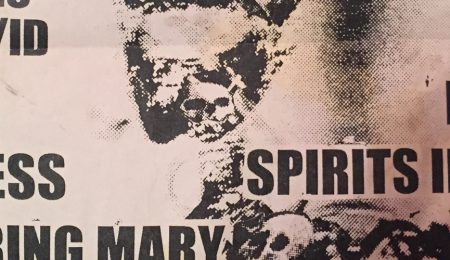 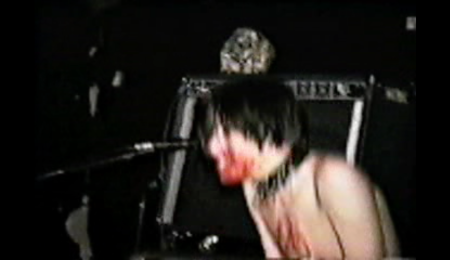 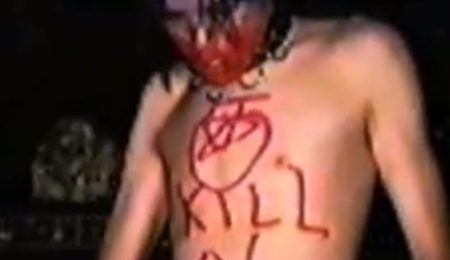 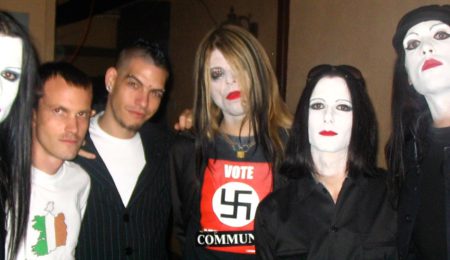