The plans were set in motion : I was to fly to Salt Lake City, Utah. Then rent a car to drive to the tiny border town of Pocatello, Idaho. Then get a hotel nearby. All of this was on my own dime, including the time and money spent making those mouse earrings. I think Andre coughed up a few bucks for one of the nights I was in the hotel. Thankfully, my “costume” was the cost of a shitty bundle of fake hair. I borrowed (my roommate) Nad’s AZ State Rifle Association hat, stuffed a bundle of hair under it, donned a wife-beater shirt, took out my piercings, left my face unshaved and… voila! I was a deadbeat redneck. Alas, my chest tattoo was showing through the wife beater, so I stuck with a sleeveless flannel (also borrowed from Nad) for the final look. I sent Andre a few photos, and he said “yes! I love it!”, so I called that a win. My girlfriend at the time 1I don’t believe we’d started using terms like “boyfriend” and “girlfriend” just yet, but we had a relationship … Continue reading thought I was an insane person. She also later confessed that she was still never quite sure if I made this whole thing up, and was instead just flying to Utah to bang it out with groupies or something. It’s a weird theory to have — I mean, she helped me do taxidermy on those mice, and she packed them up for me for the flight. That’s a lot of back-story for a time when she and I were still in an open relationship, so I wouldn’t have even needed to lie about that if I really wanted to skip town to fuck some broads in another state. Then again, this whole story does seem a little insane, so I can understand the desire to make up one’s own narrative.

I arrived in SLC around noon. It was an overcast day. I picked up my rental — which turned out to be a PT Cruiser. There was a time, probably around 2002, that I actually wanted a PT Cruiser. After a weekend spent driving around in one… holy shit am I glad I bought a Nissan Altima instead. I expected the interior to feel more like a crossover, or a sedan. Instead, it was like driving a bus. The front seats were about 3 feet apart from each other. There was no arm rest for the driver. The steering wheel sat a weird upward angle, and I the adjustment only made it higher or lower – I could do nothing about the angle.

Anyway, I took my loaner PT Cruiser, fired up the aftermarket GPS that attached to the window, and thought “I’m gonna see what downtown SLC is like”. I was hankering for a bite to eat, and a nice relaxing vodka-cranberry. I found the main street of downtown SLC and it was a ghost town. I thought maybe the town just goes home on rainy days. There were no cars. No people. No sign that anything was even open. I ducked into a restaurant and it was just what I wanted : old mahogany bar, dark atmosphere, mellow lighting, and no customers in sight. I sat at the bar and ordered a vodka/cranberry. The bartender said “oh. uhh.. would you… like something to eat?”. I said “yeah, you got some.. like, fries or something?”. He said “yeah. fries. uhhh.. I’ll be right back”. He returned a minute later with the owner of the place. They both explained to me that they couldn’t just serve me an alcoholic drink unless it was part of a meal, and they weren’t sure if “a plate of fries” constituted “a meal”. Naturally, I said “I mean.. it’s a meal to me. Does it matter?”. They laughed nervously, just saying “well… we could be fined quite a bit”. This is what happens when you let a religious group dictate your legal policies — they make very little sense, no one knows where the line is drawn, and the punishments are wildly out of place with the crime. I offered to order something else, wondering what would, in fact, constitute “a meal” but by that point they must’ve decided I wasn’t some undercover Mormon Gestapo and said “oh to heck with it, here’s your drink”. Looking around the bar, I found these disturbing paintings on the wall. They were portraits of people, done in a moody high-contrast black and white, and painted like they were supposed to be frightening. I actually thought they were portraits of serial killers, cause they sure as hell looked that way to me. On one of them, I saw this weird dot on a woman’s forehead and string-like brush srtokes over her face. While it looked like she had a bloody bullet wound in her head, I also know that I’m usually wrong about things like that. I have a sick mind, so I figured I was just projecting. As I finished off my drink and my fries, I paid the bartender and asked about the paintings. He said “ohh.. those are paintings of people who worked here”. I asked “are they… deceased? is it a memorial?”. He said almost all of them still worked there, but one of them has since left. They were painted by a former employee. I said “and what’s going on with… that one?”, expecting him to explain what I’d been misinterpreting as a bullet hole. Instead, he said “oh that one? yeah, that’s a portrait of the woman who fired the guy who painted these. He broke in that night while we were closed and painted a bullet hole with blood dripping out of it”. What. The. Fuck? I don’t know why they never took that down, but… it just seemed so odd and out of place for this white-washed-with-jesus-tears town. I drove into town, went to dinner with Andre, and went back to my hotel room. There was a cool little bar there, and they didn’t make me buy food while I drank. I woke up the next morning and drove to the “set”. The set was actually just a model mobile home. Like, it was furnished with plastic plants and non-matching furniture, and the bed was — best I could tell — basically a cardboard sleeve on a box spring, with sheets as thin as paper. This was to be the “home” where my character — Tommy — lived with his provider-slash-girlfriend Doris. We rehearsed our lines before each take, and we’d end up improvising for far too long cause Andre didn’t like yelling “cut”. That was part of the “guerilla-style filming” he wanted. He was recording it with a handheld Sony camcorder. Not something that slings over your shoulder. Not even something that would get proper sound. Or lighting. There were no lighting rigs. No other crew. Just Andre, and us actors. I should’ve expected that. But I powered through. I did my scenes. And I went back the next day to do them again, just in case. Then I did a little B-Roll footage of me at the Diner where Doris’s love interest Rudy worked. All in all, a pretty easy gig. And I had a new story. And maybe a fun little film that I could watch while super high years later.

Alas, it never came to be. Andre e-mailed me a few times over the following months with little status updates, and then suddenly… radio silence. I didn’t hear from him for years. Then, in 2011, I got a voicemail from him where he asked me to e-mail him instead of calling back (or maybe he called from a blocked number? I don’t remember). He was putting together a collection of short films he made, one of which was Doris and thought I’d want to see that. I did want to see it, and I e-mailed him back, to which he replied with a series of vague remarks that answered almost nothing :

My dear friend Mitcz,
You are great, the greatest of the great — truly!  Yes, this is ***REDACTED***.  I am sorry for disappearing — sometimes one needs to vanish in order to rediscover one’s self.  Over the past four or so years, I have had many opportunities to do so.  A bout with lymphoma helped to recenter me within myself spiritually (I’m fine now), and in so doing my creative vision automatically deepened.  I shot another version of Doris in 2008, and blended that one and the Idaho version into one sharp, flowing comedic short.  Actually, this is among a series of works that I have recently re-edited, according to my enhanced creative vision.  As I indicated in my voice mail, I am putting together a two-volume collection, and Doris will be on the first volume.  I would love to send it to you, as I am sure you would love to see how your work turned out.   As it happens, you were the most outstanding part of the Idaho version, so I tried to emphasize your character.  That’s the overwhelming feedback I have received from all who have seen the work; people thought Boris’ acting was “pretentious” and “overdone,” and Jackie seemed out of focus.  But you were bright and alive and hilarious, and that is what I want to convey in the work.

Moreover, I remember fondly our conversations previous to the production, and I consider you to be one of the most interesting people I have met in recent times.  I hope we can resume our friendship.  That would mean a lot to me.  I am sorry if the production was in any way dismal or bleak; it was hard to organize given the limited resources in Idaho.  But I did get some stellar footage from it, and that is what I will include in the final cut.

I hope you have been well, and look forward to our continued communications.

I didn’t reply to him immediately afterwards, but 4 days later. By that point, he was upset with me and thought I was brushing him off. His final email to me — from an address that stopped working a few days later — was simply this :

Okay, I’ll take your nonresponse to mean that maybe you don’t want to see the material right now.  Sorry for the inconvenience, thanks anyway.

And that’s the last I, or anyone else I’ve talked to from the project, ever heard from the guy. All I’ve been able to find online are the resumes of other actors who mentioned the film, and very oddly a whole new version of the film with a whole new director, of which about a minute is available on YouTube. It’s like those Indian re-cuts of American films you hear about, but… for a film of which the American version was never released. But, goddamnit, they’re using the exact earrings I made! I don’t know what that’s about, but this is all I could find.

So, that’s where the story ends : on a series of giant question marks, all leading to dead-ends. Sorry if you expected to see the film, but that’s the boat I’m in as well. 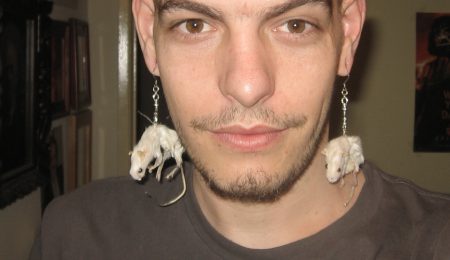 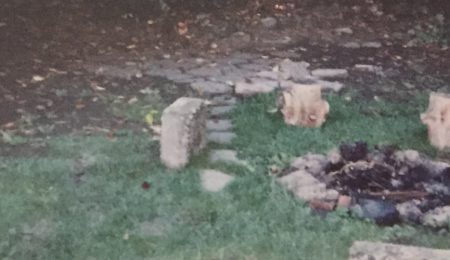